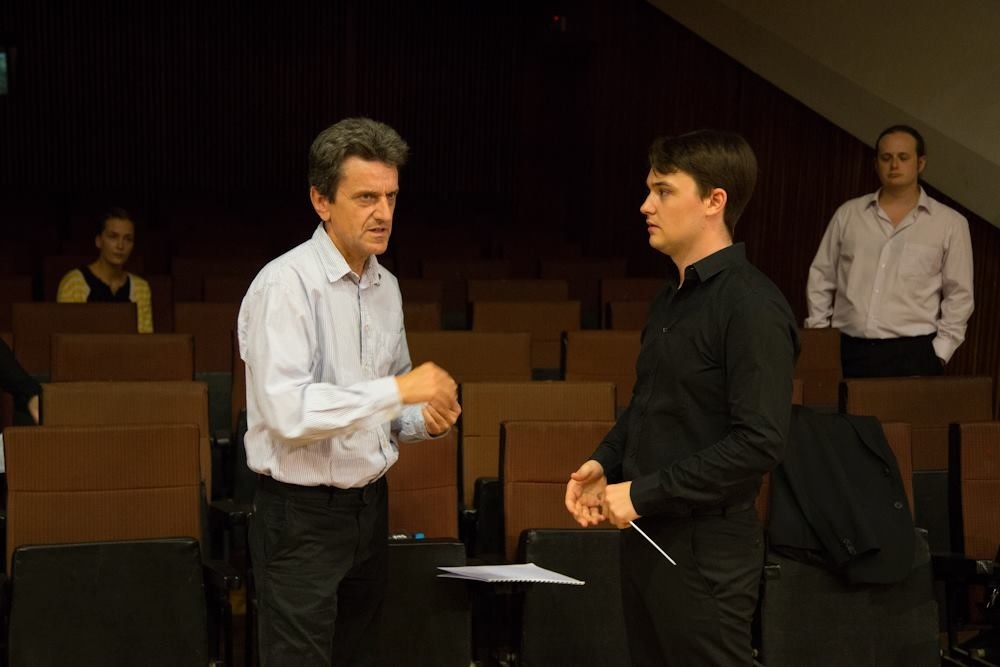 I just had the very great pleasure of teaching on an international conducting workshop alongside my old friend and teacher Johannes Schlaefli, who’s the Professor of conducting at the Zürich Musikhochschule. The thing I love most about teaching is how much I learn myself during the process. I was chatting about this with a friend of mine who reminded me of a guest post I wrote for the blog “Where’s Runnicles?” I have to confess I’d completely forgotten I’d written this, and re-reading there’s so much that is relevant to what we were working on in our course. Anyway, I re-post it here both for interest and as a lazy way of actually blogging about something for once…

The question I most often get asked in pubs (apart, of course, from “Don’t you think that’s enough of that now?”), is what does a conductor actually DO? Isn’t it just a matter of standing at the front and waving your hands about whilst the musicians play in spite of you? My usual answer (when I haven’t had the forethought to tell them I do something more appealing for a living, such as working for the tax office or designing city-centre one-way systems), is obviously, yes. That is pretty much what we do…

This came up recently on the BBC Scottish Symphony Blog in an excellent post on the subject by cellist Anthony Sayer. He points out that conductors tend to get a bit defensive and edgy when they have to explain themselves. Gordon Bruce, a friend of mine who plays double bass in the Royal Scottish National Orchestra, told me his stock pub answer is to compare the conductor to a football manager. If you watch a match and try and figure out what Alex Ferguson is doing, he just seems to be turning red and generally getting worked up, never actually kicking the ball. His work has been done before in training, just as the conductor’s has been in rehearsal. It’s a neat analogy, but I think only tells half the truth.

I think the reality is that all great conductors somehow carry a sound of their own. The timpanist and composer Werner Thärichen tells a wonderful story of his time in the Berlin Philharmonic. Some average conductor or another was on the podium and they were in a “business-as-usual” rehearsal. Thärichen was busy reading his score during a stretch of rests when out of nowhere the orchestra’s sound changed into something much more special and beautiful than before. He looked to the podium and saw nothing new there, but then followed his colleagues eyes to the door. Furtwängler had just entered and was standing at the back listening.

It was his presence alone that had created this incredibly beautiful sound… [Furtwängler] carries the sound so strongly within himself that he brings out the sound in others… the most beautiful thing that an orchestra can experience is when this person is totally open, and you are invited to join him…. that’s when you make this kind of music.

Bernard Haitink, the revered elder statesman of conductors, has this quality in spades. He only has to raise his hands and somehow the Haitink sound – clear and balanced yet somehow warm – emerges immediately. Haitink is rare in being pretty much universally loved by the orchestras with whom he works. He also says very little in rehearsal (which helps), working instead by gesture and eye contact with the players and keeping anything he says short and deceptively simple. This is another great lesson for conductors. Our art (if I may grandly call it that) is a physical one. Players will happily listen to your hands, but hate it when you painfully explain the quality of sound you want. Neeme Järvi, the possessor of possibly the finest manual conducting technique around, goes further in stating that if a conductor can’t create a sound with their hands, they are not a conductor.

What is certain from the magnificent Bruckner Eighth I heard the BBCSSO give recently is that Donald Runnicles is certainly a conductor with a sound. With his baton in his left hand he coaxed textures from the orchestra that seemed to hang in mid-air. The high-points of the music shattering yet balanced. How exactly he achieves all this was the subject of his master class with students from the Royal Scottish Academy of Music and Drama. The participants Duk-Kyung Chang, Alejandro De Palma Garrido, Hamdan Al Shuelly and Jessica Cottis conducted Beethoven’s Creatures of Prometheus Overture and Elgar’s First Symphony, a work which in my humble opinion is a masterpiece, the slow movement alone being worth the price of your ticket.

Runnicles has real presence, but is very softly spoken. He refrained from demonstrating and was supportive but direct with the students. His main thrust was about contact with the players, asking again and again for the student not to conduct a universal play-with-me, but rather to “seek people out”. Not just the melody is important for him, but rather they should be constantly looking for something interesting ticking away under the hood of the engine. Two pearls were seemingly quite obvious: always tell the story of the music, and phrase it just as you would sing it. But like all the best crystallizations of knowledge, these things run far deeper than they appear to on the surface.

Technical tricks, such as holding the baton at the balance point to allow it to float seamlessly through a quiet passage, were balanced with some pretty good practical advice, such as when a student couldn’t quite get a subito pianissimo (suddenly quiet) moment: “Like when riding a horse you need to think the next jump well ahead.”

He also spoke a lot about what I would call being centred. This is a deceptively tricky thing to achieve. After all, we can all stand still at a bus stop without waving around like a reed in a storm, and yet put most young conductors in front of an orchestra and all of a sudden we seem to have flamingos’ knees and the elbow joints of an octopus. Runnicles advised that we all need to find our central “Zen” place and that like an oak “the trunk never moves”. He advised them to imagine a wall behind their head with which they shouldn’t break contact.

He also passed on a superb story told to him by the orchestra at Bayreuth. The great Hans Knappertsbusch was conducting Götterdämmerung, Wagner’s epic summation of the Ring cycle. He sat for the entire performance until the climax of the Funeral Music when he slowly stood up. The effect was electrifying and the orchestra nearly fetched the plaster off the roof and the paint from the walls.

The impression Runnicles gives is one of a conductor who has arrived at a great simplicity through years of mastering the complex. Runnicles has taken the long way around to reach the top of his profession. He was not shot to the top at a young age, but rather has worked up from repetiteur (rehearsal pianist) in the German opera houses perfecting his craft all the way. This simplicity-through-mastery reminds me of when I was in Den Haag and went to visit the Mauritshuis gallery, which numbers amongst its treasures Vermeer’s Girl With a Pearl Earring. It’s such a familiar work, but one I’d never seen in the flesh before. The guide told me to get close up and peer deeply at the pearl. It is made with barely more than two strokes of the brush. A single twist of white paint and a small dab to pick out a reflection. In that twist-and-dab Vermeer captures a whole and perfect iridescence that seems to stand out from the canvas into reality. Simplicity arrived at though mastery.

Runnicles touched on a difficult subject, pointing out that for years all orchestral musicians have trained to be the best they possibly can, reaching a professional level that is simply staggering. Yet in an orchestra they have to subsume their musical desires to the whole, or worse still, to the conductor. Players always say that the best conductors are the ones who “don’t get in the way”, which can give a false impression of someone who they can easily ignore. I think that in actual fact the greatest conductors give room for all the musicians to play with their feelings and instincts, yet knit everything together into a single unity. Being the central point for chamber music, rather than a central dictator. When these stars are aligned, an orchestra takes flight.

It seems to me that within all of this is the essence of conducting. Now this is not, perhaps, the most simple explanation, but then again it’s not a simple matter. Perhaps I should print this off and take it with me to the pub so I can slip a copy to the next person who asks, “so what is it you actually DO…..?”