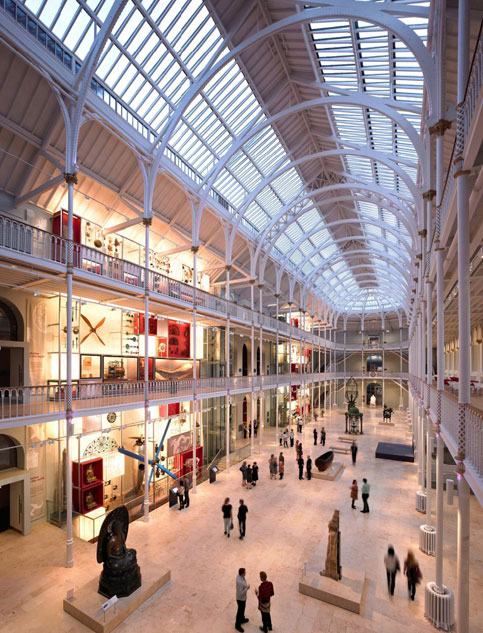 I remember the first time I walked into the vast atrium of the National Museum of Scotland in Edinburgh and falling deeply and irrevocably in love. Of course it’s just the same old trick cathedral builders have been using for a thousand years, enclosing air and light on such a grand scale as to give us a taste of our insignificance that’s both comforting and slightly unnerving. Yet I’ve always found that with concert halls the places I love most are the ones that feel most intimate, even when built on a grand scale.

Something happened to classical music during the 19th century that didn’t happen in most other forms of music: it went from being an activity to a ‘thing’. In other words, from Wagner on, ‘serious’ music became something that you sat and contemplated, rather than something in which you somehow involved yourself. Now please don’t misunderstand me — I’m not calling for the days in which musicians were court servants playing pleasing background noise for a disinterested elite. But it seems to me that whilst other forms of music maintain different modes of listening we have evolved to only one, the mode of Silent Contemplation. Even applause, the bread and butter of Mozart who would be upset if the audience didn’t cheer a pleasing phrase, has become a taboo. Certainly some works are wrecked by the interruption of the communion of silence that follows something like Mahlerʼs Ninth, but after a ripping Tchaikovsky first movement, why the hell not?

I’m sure this feeling that classical audiences must be passive bystanders has had an effect of the way concert halls have been designed. Many major halls built in the Twentieth Century are one-way affairs, designed to plunge the audience into a state that is separated from what’s happening on stage. Alas, dare I say it, some musicians even perform like no one can see them too… I’m sure the immense success of the BBC Proms is that the Royal Albert Hall is not a concert venue, but a multi-purpose space. The Arena where all the hardcore Prommers stand always has a party atmosphere, even before a heavyweight work. Regular concert goers, who might ordinarily sniff a little at inter-course applause, lustily shout ‘heave-ho!ʼ as the stagehand brings on the piano, and ironically applaud the concertmaster who can find the piano’s A. The silent contemplation happens, but the feeling in the Arena is that it happens by choice, rather than convention.

So the National Museum of Scotland has just had a huge revamp. Aside from its glorious atrium used to be a rather fusty old museum that made you wander round boxes of stones or stuffed animals in a passive silence. That is absolutely not the case any more. The place buzzes with engaged activity, old couples, thirty-somethings, young families (with the Dads just as excited as their kids), and signs with the encouraging ‘Please Touch Me’. The stuffed animals are still there, now hanging from the ceiling or dotted around the floor. The whole thing is a wonderful example of bringing the essence of a place alive without losing its central message.

Can we do this with the concert hall? Absolutely! In Miami the Gehry-designed New World Center is a marvel of outside-in thinking: The space is large but the stage is enveloped by the audience; there are five huge ‘sails’ that float above the stage, onto which images, films or lights can be projected. Best of all though is the outside wall, a huge blank canvas onto which they project the concert happening inside, live and for free. Such thinking radically re-involves the audience in the experience. The twenty-first Century Concert Hall is here, and it’s right by the beach.