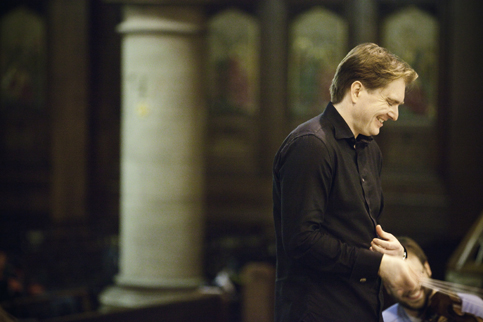 A dear friend of mine, a German conductor who I wonʼt embarrass by naming, once went to work with a Russian orchestra. Before the first rehearsal he sidled up to the concertmaster to ask which language he should work in; he knew that some Russians speak better German than English and wanted to use the most expedient language for the painful process we call rehearsal. The leader eyed him wearily from under heavy lids:

“German okay. English better. But best…” he slapped his left hand over his mouth and waggled his right arm. In other words; shut up and conduct.

Even the great Carlos Kleiber said that every time a conductor opens their mouth in front of an orchestra, they just put another nail in their coffin.

So why on earth should a conductor want to blog? Thereʼs something inherently distasteful about people sharing their innermost thoughts in such a public fashion, and itʼs no coincidence that many of the people I most admire are the most taciturn.

Well, I think there is something that needs to be said. My lifeʼs work, if I can be said to have any, is in trying my best to connect people to music. I love music more deeply than I could ever express in words and having it in my life has enriched and guided me more than anything else. It was only by sheer dumb luck that classical music (for want of a better term) came into my life. The idea that others may not be so lucky terrifies me.

My credo is that great music and great art can be appreciated by anyone with ears to hear and eyes to see.

The subjects of this blog will be varied and may indeed ramble out of music onto other topics. Maybe Iʼll even find something to say.